Androgenic alopecia or male pattern baldness is a progressive hair loss condition that can be divided into different stages. The balding men experience follows a gradual and almost set pattern. This can be determined by observing the hairline as well as the scalp as it progresses. 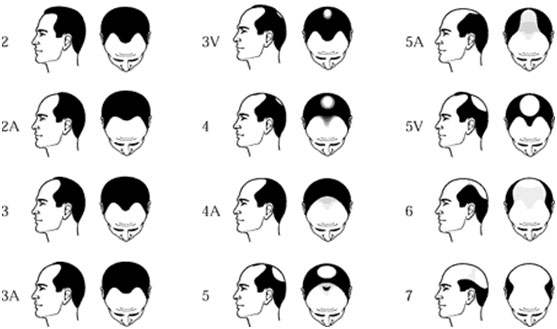 It was Dr. James Hamilton who is known to have first recorded the different degrees of male pattern baldness as it advances. He initiated the process during the 1950’s categorising it in seven stages with the third stage being split into two, creating a total of eight patterns. It was an already reliable scale to determine baldness and was further expanded in the 1970’s by Dr. O’Tar Norwood, adding four more patterns. He did away with the first stage and enlarged the second, fourth and fifth as well as providing another variation of the third pattern. This development has made it easier to distinguish among the different cases of androgenic alopecia. The modified scale was renamed into the Norwood Hamilton Scale (NHS) appropriately joining the two interpretations of these well-known male pattern baldness experts.

Discussing these different patterns can help determine which kind of anti hair loss treatment would be most appropriate at a certain stage. It would seem however that scalp micropigmentation (SMP) can be made use of at any stage of male pattern baldness whether to treat certain areas or the entire top of the scalp.

There is noticeable recession in the temporal area of the hairline with the frontal region still having hair. NHS 2A will have the frontal area as having receded further.

The recession in the temporal area has gone deeper just stopping short of the ears. There is still some hair in the frontal region though less wide than in NHS 2. NHS 3A will have the tip of the frontal area flatter. NHS 3V will have a bald area starting to appear in the central vertex area.

The central vertex region has widened with the frontal area thinning out. There is also a further recession in the temporal area that is in line with the ears. NHS 4A will have almost the entire frontal area lost with only a slight growth in the center. It will still however have the central region intact.

The entire top of the scalp will exhibit total baldness with only the upper sides and back of the head having hair.

This is a more severe form of NHS 6 where only the lower sides and the back of the scalp will have hair.